The Ealy House was a very exciting place to be on May 19th as the New Albany-Plain Township Historical Society launched a new event – Living History: New Albany in the 1860s.  For the most part, the rain held off, the sun came out, and it was a beautiful day. Over 1,000 people from the New Albany and Plain Township area attended the event.

One sponsor, REMAX Town Center/Ron Kendle helped get the Ealy House ready for the large wave of visitors by landscaping and sprucing up the outdoor spaces a few days before the event.  The peonies, lilacs, and hibiscus plants were so inspired that they bloomed right on cue. The Ealy House property never looked better. 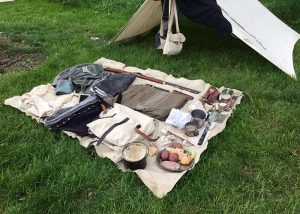 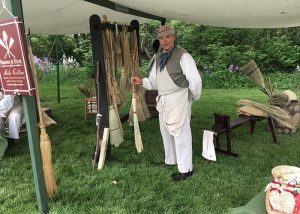 Thanks to our primary sponsor, Eagles Pizza/Dennis Keesee, a Civil War camp re-enactment by the “76th Regiment Ohio Volunteer Infantry” anchored the event and piqued a great deal of community interest.  With Civil War-era tents spread across the Ealy House yard, several musket firings, and fascinating information shared by the re-enactors, the residents seemed anxious to learn about this important time in our history.  The Civil War re-enactors also demonstrated broom-making and early carpentry techniques during their presentations.

In addition to the Civil War re-enactment, the “Irish Linen Worker” captivated his audience with a demonstration of how early settlers turned an acre of flax into garments worn for a lifetime by using a weasel, spinning wheel, and loom.

Rhonda Harris, a New Albany resident and student at Belmont College, demonstrated old plaster mold techniques and assisted over 300 people make their own small plaster pieces to take home.  She also furnished two large tents for use during the sprinkles of rain.

Emily Eby and Mark Baranoski, with the assistance of the “Helping Hands,” kept the campfires burning and the candle-making production moving along.  The “Helping Hands,” a group of elementary school girls led by Pam (pictured at left with granddaughter) and Richard Whitelock, wore costumes from the era as they assisted community residents of all ages in creating their own candles.  Throughout the day, there were never fewer than ten people making candles at one time. 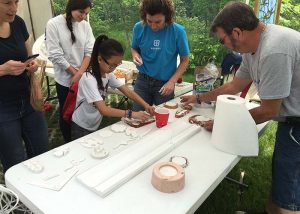 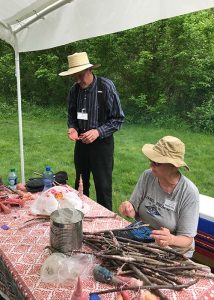 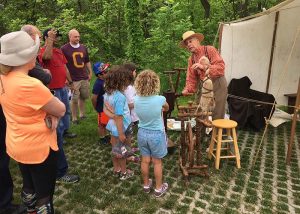 In addition, young visitors learned how to write with a quill pen and play with toys popular in the 1860s.  Thanks to Chandler Kisiel, a few were even able to walk on stilts! After the parade, “Tim” the horse retired to the Ealy House where he joined a young calf, goat, and lamb who kept the young ones entertained.

Meanwhile at the Ealy House, docents were giving tours, tours, and more tours thanks to the many members who volunteered and Marilyn Regrut who kept the group organized.  This year, for the first time, the docents wore period- appropriate costumes purchased by the Society using funds from a City of New Albany grant. Both male and female members of the Society truly got into the spirit of the 1860s and helped make the day a learning experience for all. At the end of the day, the members were excited by the turnout and the success of the event. 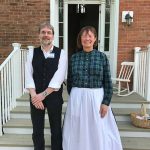 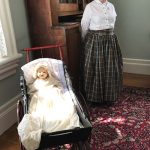 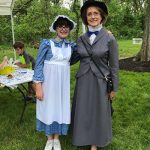 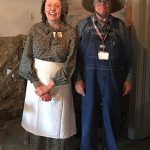 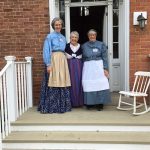