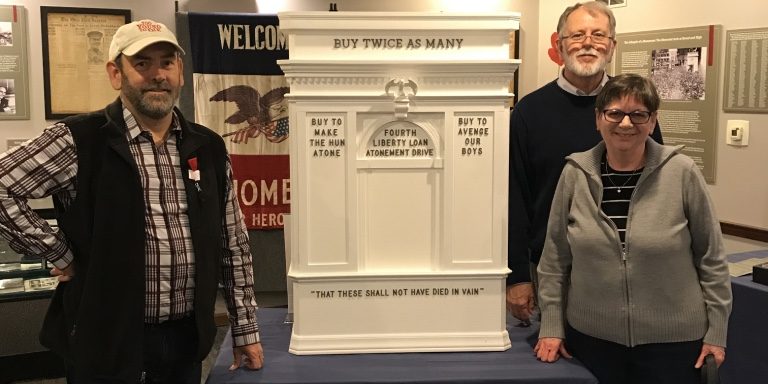 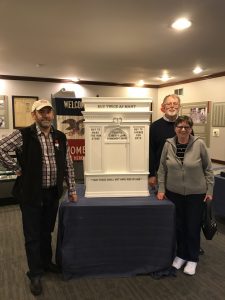 The Historical Society has been very busy the last few months and hopefully our doings have impacted the community and brought attention in a positive way. At our April 4th meeting, we shared a 2016 video created by Mark Easton with Dennis Keesee detailing the military career of Pearl Harbor survivor Milton Mapou, who passed away January 17, 2019. The biography-interview showcased his actions aboard the USS Detroit on December 7, 1941 and later his horrific ordeal aboard the USS Pringle when it sank picketing Okinawa on April 14, 1945. Lying on the deck with his leg nearly severed, Milt miraculously found himself in the water away from the ship. He ended up spending over two years in a Navy hospital but was one of the lucky ones. Sixty-nine men perished as a result of the Japanese suicide plane that hit the ship that day.

On April 28, fourteen of us visited the Columbus Historical Society. After a welcome from President Mike Frush, we viewed the many World War I displays. After touring the museum, ten enjoyed lunch and visiting at the Spaghetti Warehouse. 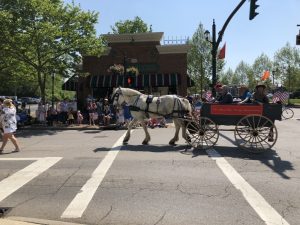 Our presence at Founders Day on May 18 was threefold. We had the horse–drawn antique spring wagon in the parade, with Robert Dean and Chandler Kisiel waving to all (at right) 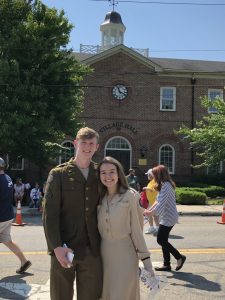 Volunteers Chris Woods and Sarah Joseph walked into the crowd handing out cards advertising our upcoming D-Day 75th Anniversary event. The two were attired in original WWII uniforms which added a very nice touch. Besides our parade presence, Dennis Keesee met the two along the route and went to the school. During the parade and at the school, the three handed out a total of 500 cards.

The Ealy House was open after the parade with Mark Baranoski, Emily Eby, Neil Kirby, Willow Otten, Helen Pestel, Catherine Saveson, and Marty Saveson as docents. Turnout was good with at least 50 visitors. 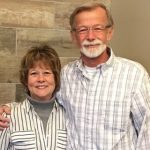 New Albany 4th of July Parade celebrates the 50th Anniversary of the First Man on the Moon
July 28, 2019